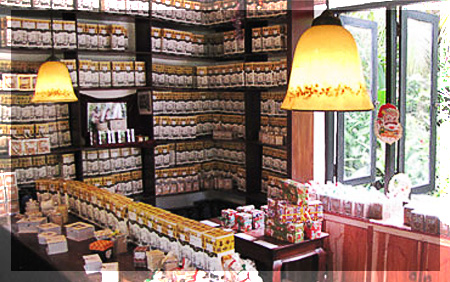 Handunugoda Tea Estate is a family owned plantation in Tittagalla, Ahangama within the Southern Province, Sri Lanka. The estate is 150 acres (0.61 km2) in extent and comprises 75 acres (300,000 m2) of tea. The balance plantation is of rubber, cinnamon and coconut. There is a well equipped tea factory on the property. Most machines were made in the United Kingdom and are over 140 years old. The factory is a living and working museum. The estate is not a mass producer of tea. Handunugoda makes very small quantities of the choicest teas, winning international recognition. Handunugoda produces the famous 'Virgin White Tea', a tea untouched by hand which has attracted attention from tea enthusiasts all over the world. Malinga Herman Gunaratne is the sole proprietor with over 45 years experience in plantation management, originally for the British plantations in Sri Lanka and then for the state owned and managed plantations. Before becoming sole proprietor of Handunugoda Tea Estate he was the regional manager of over 100,000 acres (400 km2) of the best tea lands of the Island in the country's most prestigious plantation District of Nuwara Eliya. He has written three books. The Plantation Raj, For a Sovereign State, and The Tortured Island. The latter two books are in the 7th and 6th reprint respectively. The Ceylon Souchong, Ceylon Oolong, and Flowery Cammellia were awarded "Most Innovative Teas" at the Anuga Fair in Cologne, Germany.