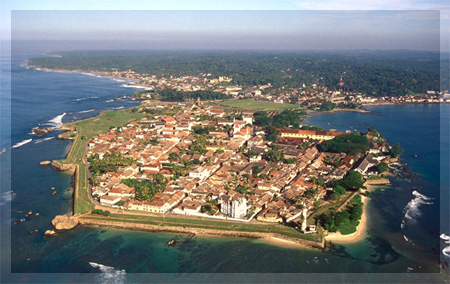 Galle (pronounced as one syllable in English, /ˈɡɔːl/ "Gaul", and as two in Sinhalese, [ɡaːlːə]) is a city situated on the southwestern tip of Sri Lanka, 119 km from Colombo. Galle is the capital city of Southern Province of Sri Lanka and it lies in Galle District.
Galle was known as Gimhathiththa (although Ibn Batuta in the 14th century refers to it as Qali) before the arrival of the Portuguese in the 16th century, when it was the main port on the island. Galle reached the height of its development in the 18th century, during the Dutch colonial period. The major river is Gin River (Gin Ganga) which starts from Gongala Kanda and passing villages such as Neluwa, Nagoda, Baddegama, Thelikada, and Wakwella, reaches the sea at Ginthota. In Wakwella over the river there is Wakwella Bridge, which is the longest bridge in Sri Lanka.
Galle is the best example of a fortified city built by Europeans in south and southeast Asia, showing the interaction between European architectural styles and south Asian traditions. The Galle fort is a world heritage site and the largest remaining fortress in Asia built by European occupiers. Other prominent landmarks in Galle include the natural harbor, the National Maritime Museum, St. Mary's Cathedral founded by Jesuit priests, one of the main Shiva temples on the island, and Amangalla the historic luxury hotel.
Galle is the main city in the most southerly part of the island, with a population of around 100 000, and is connected by rail to Colombo and Matara. On 26 December 2004 the city was devastated by the massive Boxing Day Tsunami caused by the 2004 Indian Ocean earthquake that occurred a thousand miles away, off the coast of Indonesia. Thousands were killed in the city alone. Galle is home to a cricket ground, the Galle International Stadium, rebuilt after the tsunami. Test matches resumed there on December 18, 2007.
Galle offers a unique opportunity to create a visible demonstration of the conservation of its inheritance. Galle is also an exciting, internationally famous visitor destination.
According to James Emerson Tennent, Galle was the ancient seaport of Tarshish, from which King Solomon drew ivory, peacocks and other valuables. Cinnamon was exported from Sri Lanka as early as 1400 BC and the root of the word itself is Hebrew, so Galle may have been a main entrepot for the spice
Galle had been a prominent seaport long before western rule in the country. Persians, Arabs, Greeks, Romans, Malays, Indians, and Chinese were doing business through Galle port. In 1411, the Galle Trilingual Inscription, a stone tablet inscription in three languages, Chinese, Sinhala and Persian, was erected in Galle to commemorate the second visit to Sri Lanka by the Chinese admiral Zheng He.
The "modern" history of Galle starts in 1505, when the first Portuguese ship, under Lourenço de Almeida was driven there by a storm. However, the people of the city refused to let the Portuguese enter it, so the Portuguese took it by force.
In 1640, the Portuguese had to surrender to the Dutch East India Company. The Dutch built the present Fort in the year 1663. They built a fortified wall, using solid granite, and built three bastions, known as "Sun", "Moon" and "Star". After the British took over the country from the Dutch in the year 1796, they preserved the Fort unchanged, and used it as the administrative centre of Galle.
Rumassala Kanda in Unawatuna is a large mound-like hill, which forms the eastern protective barrier to the Galle harbour. Local tradition associates this hill with some events of the Ramayana. 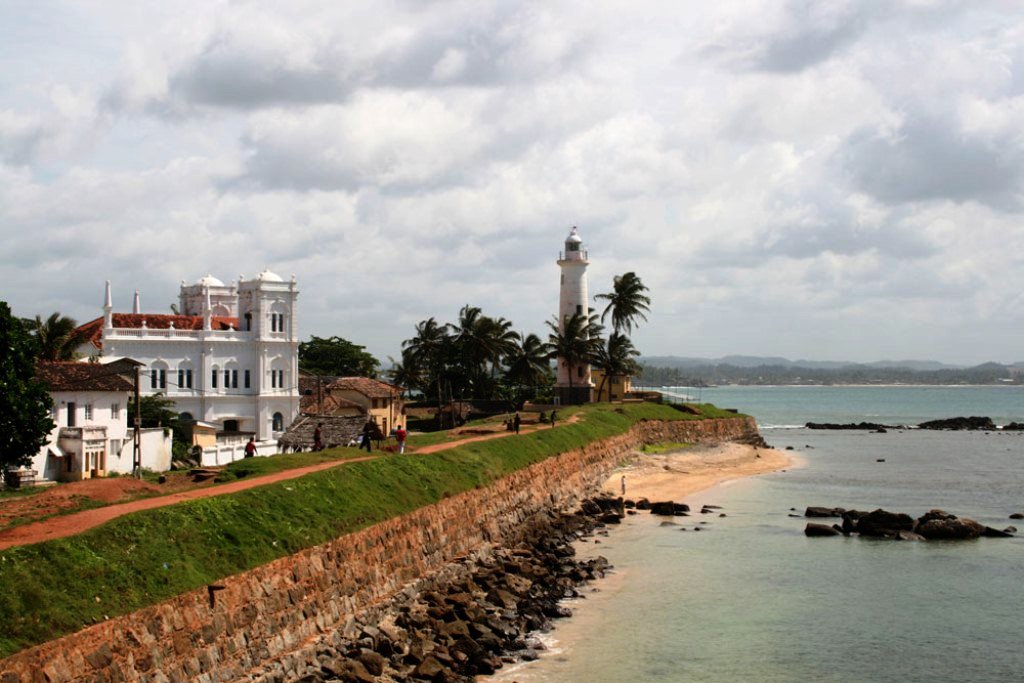 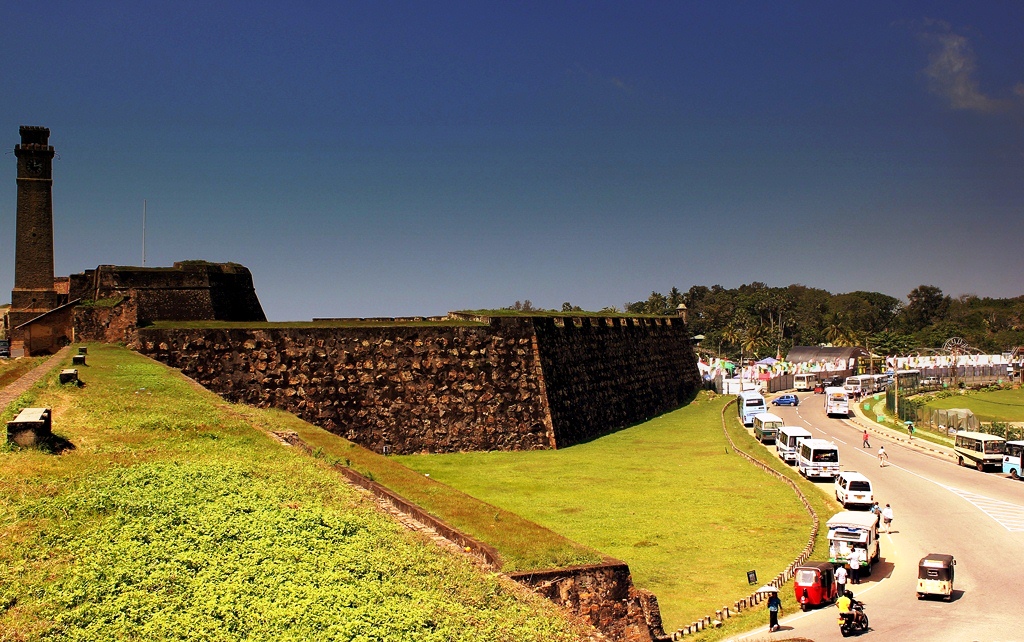 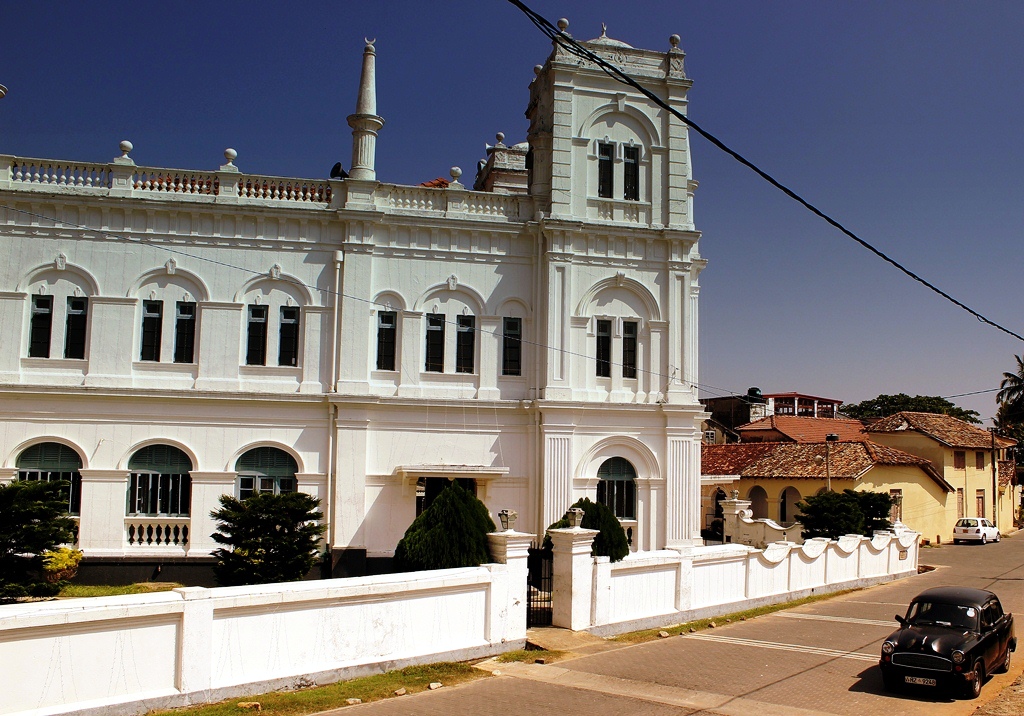