Sigiriya (Lion's rock) is an ancient rock fortress and palace ruin situated in the central Matale District of Sri Lanka, surrounded by the remains of an extensive network of gardens, reservoirs, and other structures. A popular tourist destination, Sigiriya is also renowned for its ancient paintings (frescos),[1] which are reminiscent of the Ajanta Caves of India. The Sigiriya was built during the reign of King Kassapa I (AD 477 – 495), and it is one of the seven World Heritage Sites of Sri Lanka
Sigiriya may have been inhabited through prehistoric times. It was used as a rock-shelter mountain monastery from about the 5th century BC, with caves prepared and donated by devotees to the Buddhist Sangha. The garden and palace were built by King Kasyapa. Following King Kasyapa's death, it was again a monastery complex up to about the 14th century, after which it was abandoned. . The Sigiri inscriptions were deciphered by the archaeologist Senarath Paranavithana in his renowned two-volume work, published by Oxford, Sigiri Graffiti. He also wrote the popular book "Story of Sigiriya".
The Mahavamsa, the ancient historical record of Sri Lanka, describes King Kasyapa as the son of King Dhatusena. Kasyapa murdered his father by walling him alive and then usurping the throne which rightfully belonged to his brother Mogallana, Dhatusena's son by the true queen. Mogallana fled to India to escape being assassinated by Kasyapa but vowed revenge. In India he raised an army with the intention of returning and retaking the throne of Sri Lanka which he considered was rightfully his. Knowing the inevitable return of Mogallana, Kasyapa is said to have built his palace on the summit of Sigiriya as a fortress and pleasure palace. Mogallana finally arrived and declared war. During the battle Kasyapa's armies abandoned him and he committed suicide by falling on his sword. Chronicles and lore say that the battle-elephant on which Kasyapa was mounted changed course to take a strategic advantage, but the army misinterpreted the movement as the King having opted to retreat, prompting the army to abandon the king altogether. It is said that being too proud to be surrendered he took his dagger from the waist band, cut his throat, raised the dagger proudly, sheathed it and fell dead.[citation needed] Moggallana returned the capital to Anuradapura, converting Sigiriya into a monastery complex.
Alternative stories have the primary builder of Sigiriya as King Dhatusena, with Kasyapa finishing the work in honour of his father. Still other stories have Kasyapa as a playboy king, with Sigiriya a pleasure palace. Even Kasyapa's eventual fate is mutable. In some versions he is assassinated by poison administered by a concubine. In others he cuts his own throat when isolated in his final battle.[5] Still further interpretations have the site as the work of a Buddhist community, with no military function at all. This site may have been important in the competition between the Mahayana and Theravada Buddhist traditions in ancient Sri Lanka.
Sigiriya consists of an ancient castle built by King Kasyapa during the 5th century AD. The Sigiriya site has the remains of an upper palace sited on the flat top of the rock, a mid-level terrace that includes the Lion Gate and the mirror wall with its frescoes, the lower palace that clings to the slopes below the rock, and the moats, walls and gardens that extend for some hundreds of metres out from the base of the rock.
The site is both a palace and fortress. Despite its age, the splendour of the palace still furnishes a stunning insight into the ingenuity and creativity of its builders. The upper palace on the top of the rock includes cisterns cut into the rock that still retain water. The moats and walls that surround the lower palace are still exquisitely beautiful.
More information. 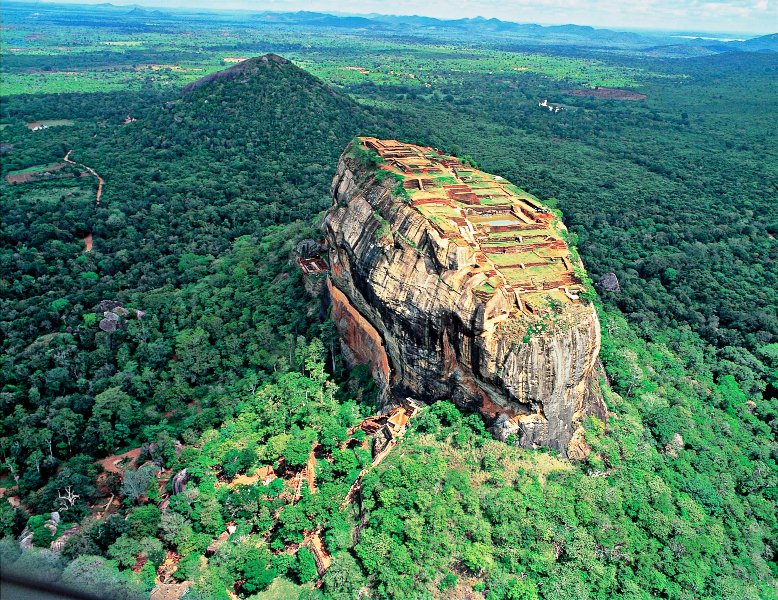 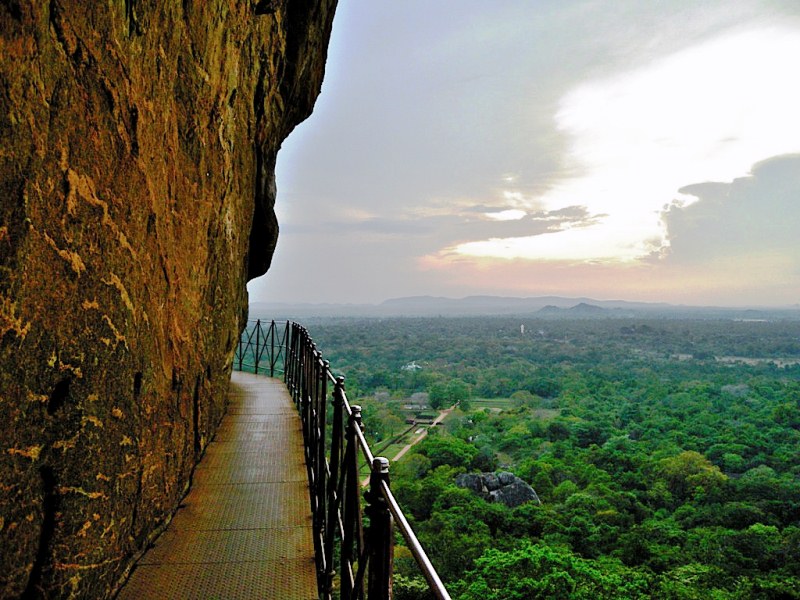 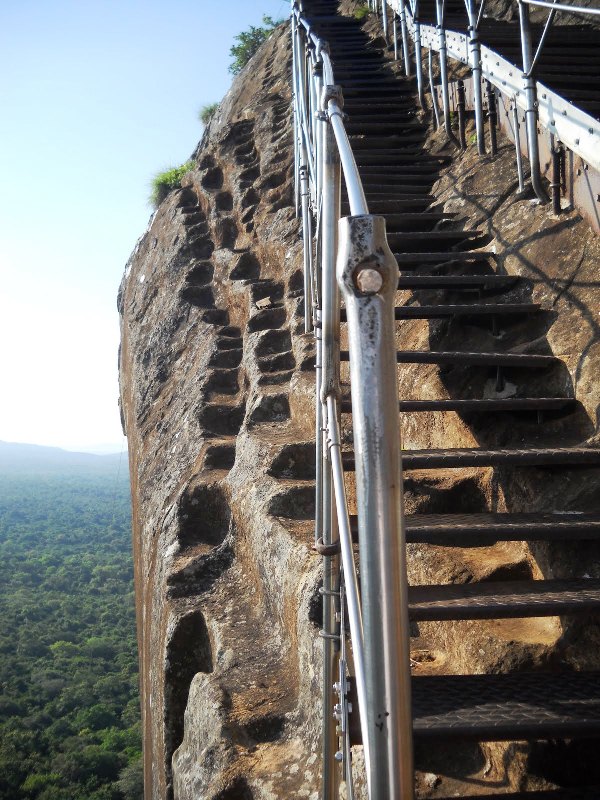 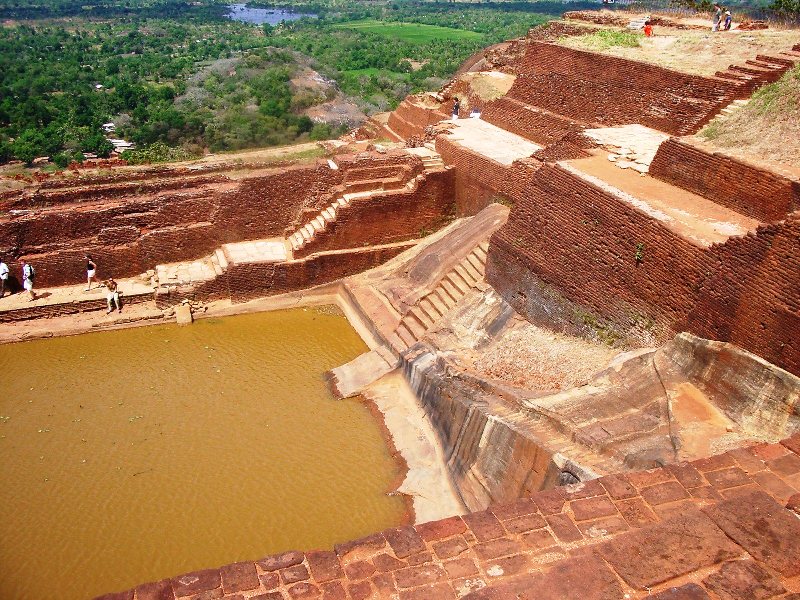 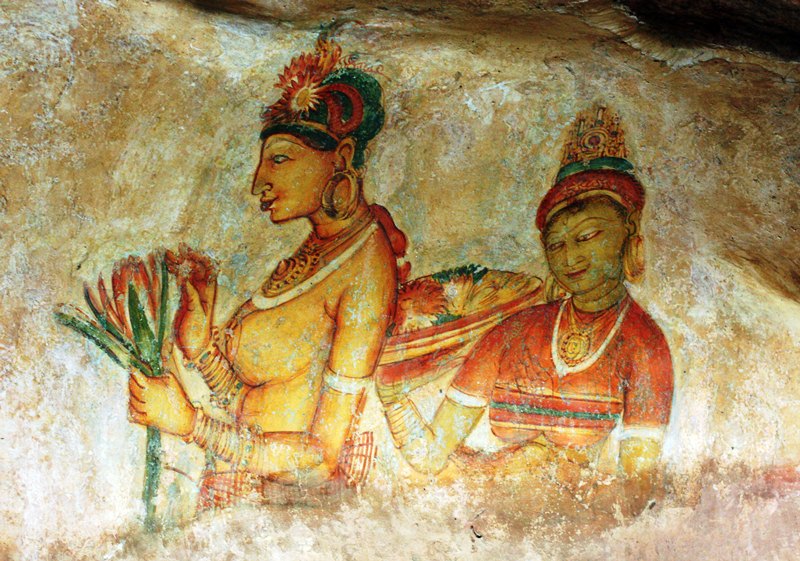