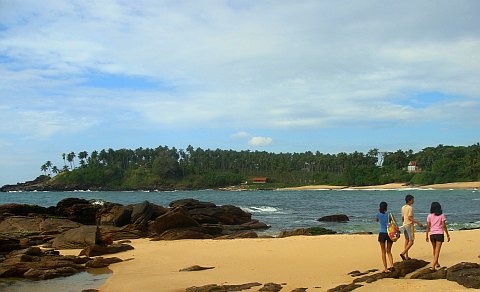 Tangalle (Sinhala තංගල්ල [ˈtaŋɡalːə]) is a town on the southern coast of Sri Lanka located in the Hambantota District. It has a mild climate, in comparison to the rest of the district, and sandy beaches.  The name of the town in Sinhala means "projected rock", a reference to the rocks which form the coastline in the town area, which contrasts with the sandy beach of the surrounding areas. Tangalle is a regionally important fishing port and a centre of tourism. In the city centre there is an old Dutch fort which is used as a prison today. The town also serves as a starting point for visits to the rock temple of Mulkirigala.

Approaching Tangalle from the west, you will encounter Goyambokka and Pallikkudawa, situated on a double bay south of the town. Beyond the town and harbour is the large bay, are Medaketiya and Medilla. Medaketiya in particular has fine white sand, excellent swimming, and is rarely crowded.