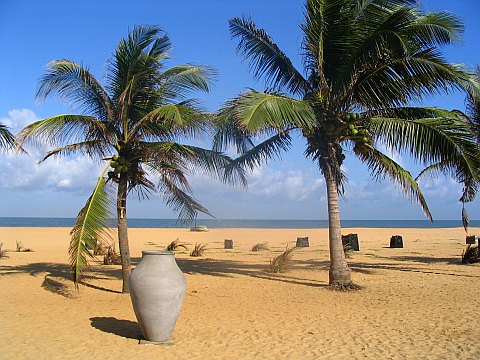 The name "Negombo" was first used by the Portuguese, a corruption of the Sinhala name Mīgamuva. The city is situated by the shores of a lagoon of the same name, and was a trading port during the periods of Portuguese and Dutch colonization.

Negombo first flourished as a center for cinnamon production along the western coast of Sri Lanka. The Moors (Muslims) began trading the spice prior to the 13th century, the quality of which attracted the Portuguese who ousted the Moors in the late 16th century, constructed a fort in Negombo and took over the trade to the West. It was during the Portuguese occupation that the Karawa, or traditional fishing clan of Negombo embraced Catholicism almost without exception.

The decline of Portuguese power in Ceylon began in the 1630s when warfare between the Portuguese and the Kingdom of Kandy reached a stalemate and the King of Kandy turned to the Dutch for help. In 1638 the Dutch agreed to help expel the Portuguese from Sri Lanka, and treaty was signed giving the Dutch a monopoly on the cinnamon trade and allowing them to garrison captured fortresses.

Initial successes resulted in the capture of Negombo in 1640 by Philip Lucas, the Dutch Director-General of the East Indies, followed by major setbacks in 1644 when the Kandian army was defeated by the Portuguese and Negombo recaptured. In 1646, following a successful Dutch recapture of Negombo an armistice was arranged between Portugal and Holland for ten years from 1640 with the two countries retaining their conquests in Ceylon. During this time period the King of Kandy sought to provoke conflict between by passing through the territories of the one to attack the other. On one occasion he marched through Portuguese territory to capture the fort of Negombo and send the head of the Dutch commander Adrian Vander Stell to his countrymen in Galle.

After the Dutch regained control of Negombo from the King through diplomacy the cinnamon business would continue to be a key part of the regional economy and so esteemed as to be described in 1663 as "the very best in the universe as well as the most abundant." However the woods in which it grew where exposed to ongoing invasions by the Kandyans for whom the disruption of the cinnamon trade was a favourite method of harassing the Dutch and increasing the costs of military protection and decreasing the profits derived from cinnamon production. By the time the British commander Colonel Stuart took over in 1796, the industry was in decline. The Dutch Fort was constructed in 1672 and remains to this day, along with a number of other Dutch buildings and the Dutch canal that runs 100 km from Colombo in the South to Puttalam in the north.