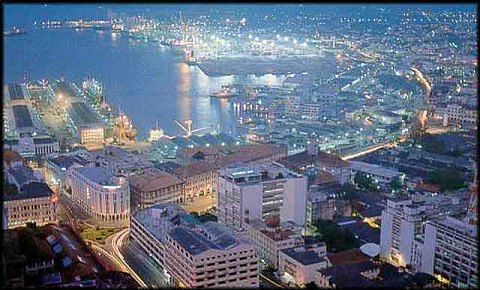 Due to its large harbour and its strategic position along the East-West sea trade routes, Colombo was known to ancient traders 2,000 years ago. It was made the capital of the island when Sri Lanka was ceded to the British Empire in 1815, and its status as capital was retained when the nation became independent in 1948. In 1978, when administrative functions were moved to Sri Jayawardenepura Kotte, Colombo was designated as the commercial capital of Sri Lanka. Like many cities, Colombo's urban area extends well beyond the boundaries of a single local authority, encompassing other Municipal and Urban Councils. The main city is home to a majority of Sri Lanka's corporate offices, restaurants and entertainment venues. Famous landmarks in Colombo include the Galle Face Green, the Viharamahadevi Park, Mount Lavinia beach as well as the National Museum.

Colombo has most of the amenities that a modern city has. Compared to other parts of the country, Colombo has the highest degree of infrastructure. Electricity, water and transport to street lamps, phone booths and etc. have a considerably good standard. The majority of the major shopping malls in Sri Lanka are located in the city, of which all are wi-fi enabled. Apart from that, many luxurious hotels, clubs and restaurants are also situated in the city. In recent times there's been an outpour of high rise condominiums in the city, mainly due to the very high land prices.

Colombo has an extensive public transport system based on buses operated both by private operators and the government owned Sri Lanka Transport Board (SLTB). The three primary bus terminals in the city: Bastian Mawatha, Central, and the Gunasinghapura Bus Terminal are located in Pettah. Bastian Mawatha handles long distance services whereas Gunasinghapura & Central handle local services.

Train transport within the city is limited since most trains are meant for transport to and from the city rather than within the city and are often overcrowded. However the Central Bus Stand and Fort Railway Station functions as the island's primary hub for bus and rail transport respectively. Up until the 1970s the city had tram services, which were discontinued. Other means of transport includes auto rickshaws (commonly called "three wheelers" in Sri Lanka) and taxicabs. Three wheelers are entirely operated by individuals and hardly regulated whilst cab services are run by private companies and are metered.

Construction of the Colombo Metro Rail, a Mass Rapid Transit railway system, similar to that of other advanced Asian cities has begun. The project was established to control the excessive traffic in the city. The project is carried out by NEB Rapid Infrastructure Projects Pvt.Ltd., an Indian and Singaporean collaboration.