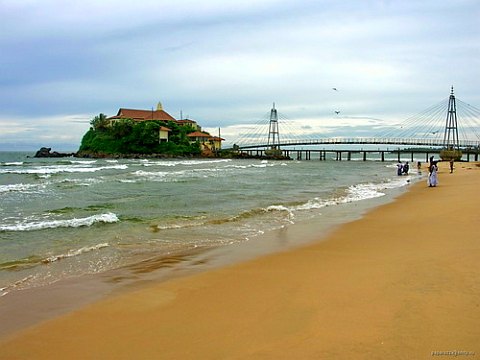 During the past Matara was called " Mahathota". The river running through Matara is 'Nilwala River. There was a wide area across this river. Hence it was called "Mhathota" which means "The great ferry ".Out all the other "great ferries in Sri lanka,Mahathota attracted the attention of the poets. According to Reverend Sri Rahula's" Paravi Sndesaya " it is mentioned that Weerabamapanam made Matara as his capital and named "Mapatuna". Portuguese Priest Quarese's reason for the name "Matara" is also referring to Nilwala River. Portuguese called this place as " Maturai " , and which means a great fortress. Portuguese called as" Maturai" in 1672. In 1744 Hide Matheren called as "Madarai". One thing that is clear here is that the Portuguese mis-pronounced the word. According to the old books it is clear that the Portuguese called it as "Maturai". "Thurai" which is a Tamil word means "Ferry".

The presently used name "Matara" has been in used for the last three centuries connecting its contact with the river "Nilwala".

Matara has been dominated from time to time by foreign rulers. As a result it is impossible to presume what was the official flag of Matara.In the past Matara became famous for its elephant orphanage .The head of the elephant orphanage was Gajanayaka.

The flag that belonged to him was the flag with the elephant on the center and four bloomed lotus flowers in the four corners of the flag. Even today this flag is being displayed at state functions as the flag of Matara along with the national flag. This practice is followed to remember the ancient history with which this flag is connected. Anybody seeing this flag can be proud of its perennial value.