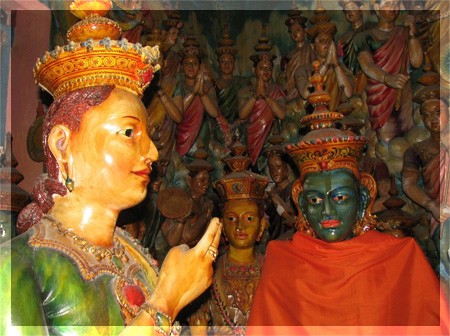 Mulgirigala is an ancient Buddhist monastery in Ruhuna almost isolated like Sigiriya.
There is a dagaba on the rock. This cave temple has a great historical significance dating back to 2nd century B.C. There are seven Viharas in Mulgirigala. There are seven Buddha image sculptures in these viharas. Mulgirigala was built by King Saddatissa in Third Century B.C.
Mulgirigala contain many beautiful wall paintings based on Jataka stories of "Wessanthara" and "Telapaththa" These wall paintings are different from Kandian era paintings.
The paintings that show women playing music instruments are specific to Mulgirigala and they are not found anywhere. The archaeologists say that this painting style is unique to Mulgirigala and differ from the kandian style. They also contain images that are more real than kandian paintings and contain more colours.
533 steps to the summit
We will be climbing 533 steps to the summit. The steps, although uneven in certain places, are well maintained & the tricky flight to the top can be tough but enjoyable. We commence the ascent to the summit of the sacred rock at the dwellings of the bhikkus (Buddhist priests) at the base. A stone path soon gives way to a flight of steps leading to the flank of the rock.

The first terrace
These steps end at the first terrace, where there is a Bo tree & twin cave temples known as the Paduma Rahat Viharaya with two 14 m Buddha statues in the state of Parinirvana (final extinction-eternal release from the suffering of the cycle of life death & rebirth) & images of Hindu deities God Kataragama, God Vishnu & local deity God Vibishana among others. The interior walls & ceiling of the Paduma Rahat Viharaya are covered with fine murals-some very old, some not so old, but all of them are equally intriguing.
The second terrace
Then we climb once again till the second terrace called Madamaluwa (middle courtyard) on which is situated the Madamaluwa Viharaya. Mulgirigala is another excellent example of an ancient living temple, as it is an important destination for devotees, & this terrace with its shrines is an ideal place to witness their devotions. These shrines are popular with devotees since it is believed that favours asked here are invariably granted. Plenty of vendors to offer you hot Belimal tea (herbal flowers boiled in water) drunk with solid coconut honey called jaggery. There are fresh divul (woodapple) fruit-drink.
The third terrace
Once again we climb along, but now a steep ascent till we turn into a flight of steps hewn from the solid rock, to reach the third & largest terrace, the location of four cave temples. The main temple, the Raja Maha Viharaya, is an ancient temple with a recumbent Buddha statue 15m in length. It is believed to be one of the 64 temples erected by King Kavantissa, father of the hero of the nation, King Dutugemunu (161-136 BC) of Ruhuna.
Sri Lanka's Rosetta stone
The Raja Maha Viharaya serves as both an image room & as the potgula (library). On a visit to Mulgirigala in 1826, colonial civil servant George Turnour found in this library Sri Lanka's Rosetta stone, ola leaf (palm leaf manuscripts) containing the key to translate the Mahawamsa (the Great Chronilcle); Tika (commentary) made it possible for the Mahawamsa to be translated into Sinhala. The translation enabled scholars to study the glorious unbroken history of the island of Lanka since 543 BC to comparatively modern times & correlate with the numerous & varied evidence in the form of inscriptions, great living monuments such as rainwater reservoirs, stupas & temples & archeological ruins.
Three more temples
The other three temples are Aluth Viharaya, Naga Viharaya & the Pirinivan Viharaya. The pond right in front of Naga Viharaya is believed to cure female infertility. The pond also bears a 12th century inscription in Sinhala giving the ancient name of Mulgirigala as Muhundgiri.
The fourth terrace & the legend of the great snake
The ascent to next terrace, the penultimate one, being so steep, we will be climbing with an aid of an iron chain. Now the terrace. It is possible to look down a fissure extending almost all the way down to the ground level, a phenomenon attributed by legend to a great snake that sprang from a tree up at the rock, splitting it asunder. If a couple of coincidences could have caused it, then the snake causing such an impact on a rock ought to have been as large as an Anaconda. South American name Anaconda is said to have been derived from Sinhalese name, Henakadaya. Among many other dictionaries, The American Dictionary of the English Language indicates that the name could be an alteration of Sinhalese Henakandaya. Then again it must have fallen exactly on a fault line of the rock. Then again, that would call for you to stretch your credulity a bridge too far. So we refrain from insisting on the legend. But then again the legends too, like everything else have some origins.
The final climb & the panoramic view
The final climb is a steeper one. We pass a Bodhi tree believed to be one of the saplings of the Sacred Sri Maha Bodhi tree at Anuradhapura, before reaching the summit with a renovated stupa, image house & a temple. A tricky bend takes you to the summit. We have a panoramic view stretching to the southern coast. Mulgirigala contain many beautiful wall paintings based on Jataka (550 previous births of Buddha) stories. These wall paintings are different from Kandyan era paintings. The paintings that show women playing musical instruments are unique to Mulgirigala. The archaeologists say that the painting style is unique to Mulgirigala and differ from the Kandyan style. They also contain images that are more real than Kandyan paintings and contain more colours. 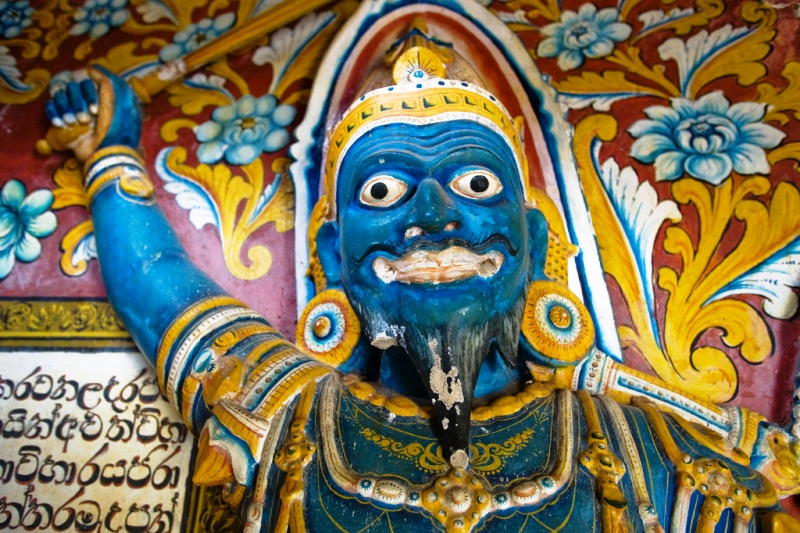