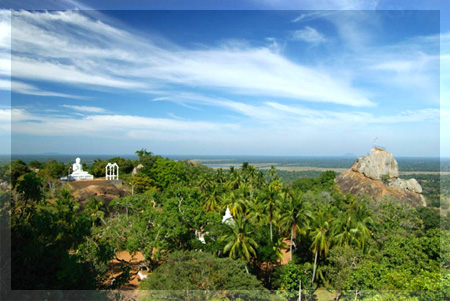 Mihintale is a mountain peak near Anuradhapura in Sri Lanka. It is believed by Sri Lankans to be the site of a meeting between the Buddhist monk Mahinda and King Devanampiyatissa which inaugurated the presence of Buddhism in Sri Lanka. It is now a pilgrimage site, and the site of several religious monuments and abandoned structures.
Eight miles east of Anuradhapura, close to the Anuradhapura - Trincomalee Road is situated the "Missaka Pabbata" which is 1,000 feet (300 m) in height and is one of the peaks of a mountainous range. Though this was called Cetiyagiri or Sagiri, it was popularly known as Mihintale - the cradle of Buddhism in Sri Lanka.
Thera Mahinda came to Sri Lanka from India on the full moon day of the month of Poson (June) and met King Devanampiyatissa and the people, and preached the doctrine. The traditional spot where this meeting took place is revered by the Buddhists of Sri Lanka. Therefore in the month of Poson, Buddhists make their pilgrimage to Anuradhapura and Mihintale.
From ancient times a large number of large steps were constructed to climb Mihintale. It is stated that King Devanampiyatissa constructed a vihara and 68 caves for the bhikkhus to reside in. At Mihintale there gradually grew a number of Buddhist viharas with all the dependent buildings characteristic of monasteries of that period.