Once again I made sure how much Asian and European cultures differ. We were invited to a big and hilarious feast of a little twelve-year old girl, who became a maiden. And immediately there came to my mind the sounds of unmortal hit from Quentin Tarantino’s “Pulp Fiction” - "Girl, you'll be a woman, soon". 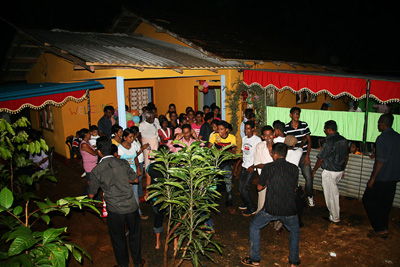 I am sitting on the terrace, not touching anyone, and Kasun is cleaning the house. Kasun is our new house worker, 2 times a week he makes the house, dusts and does moist mopping, changes linen and towels. In the morning he goes to the college, and in the afternoon he earns money for studies, a classic enough thing in Europe, but not here. Right because of this he is a source of pride not only of the whole family, but of our landlord Upula, who told us about this. Good on you Kasun, carry on! Such people always inspire respect. Kasun speaks English very badly, but he is trying, and the language of gestures is common all over the world. I am sitting, drinking my morning tea, when Kasun suddenly comes up to me and starts telling something, I understand that he is inviting us to some party, but I can not understand why. Alyonka comes to rescue as she has already discussed this with him. “All is simple, - she says, - his younger sister came around and this is a big feast for the whole family, she became a young lady. On this occasion they make a great party. There comes the kin from all over the island, friends are invited, the table is laid and even a DJ is invited. “Fine kettle of fish” I thought. “A lot of white goodies have something to learn from the Asians”. Really, sometimes you just get astonished with how poorly and especially in Russia, the issue of sex education is developed. However much of paradox it might be, but still there are cases when girls get scared of first bleeding, hide it from their parents, feel ashamed. At school they might endure a lot of chaffing. Here, every child is aware and is not ashamed of it, whereas Sri-Lanka is a country with very puritan education. I am not mentioning that before the wedding “no way”. Young couples even do not hug each other and kiss, and at discos they dance separately, though honestly speaking you can not meet local girls at discos.

By the way, this is one more feature of local specifics. You come to a disco, and there generally boys dance, holding each other by hands, they can even dance a ballade. "What a gay parade!?" would said Garrik Harlamov from Comedy Club, though, of course, he would be wrong, this is absolutely not a gay parade, this is local flavour. Perish the thought, I am not calling to that, but to the right attitude of the society to changes in a child’s organism – certainly. It is clear that we accepted the invitation readily. And immediately the question appeared – what to give as a present? Do you have any ideas? As for me, nothing came except the idea to present a case of condoms. As usually I shared this “creative” idea with Priyatna. He estimated my sense of humor, laughed and said that we should present a GOOD THING! We immediately imagined vividly the scene when we come on a tuk to Galle, get into the store and right from the doorstep require – “Would you sell us a GOOD THING! Hmmm. To my quite a logical question “Where can we buy this GOOD THING?” came a quite logical answer: “In the GOOD THINGS shop!”. The curtain drops!

The GOOD THINGS shop appeared to be a small fancy fair pigeon-hole. Spare parts for gas-stoves and electric guitars, violins and cricket bats, house-ware and stereo systems. And plenty of different electronic stuff from Sony to Chinese Sanyx. And all this on 40 square meters. Asking Priyatna what to present and how to understand what is a GOOD THING like was for nothing, he kept silence, like Malchish-Kibalchish* before bourjouins*. “Here!” announced Priyatna to us and pointed with a finger to one of the shadow boxes. Well, it was quite expected - a dinner set of 37 pieces. “Money will be spent, and this will serve long and most likely will become a part of her dowry”, added Priyatna. We fully agreed, though, of course, imagined for a moment visiting a family of our friends in their private residence, somewhere in Moscow region, on the occasion of 12-year anniversary of their daughter and take as a present not an iPod, a PSP or a bag from Gucci, but a dinner set for 6 persons. I think you will remember for long the eyes of the b-day girl after she opens the present box.

And here comes the X hour, 8 o’clock in the evening, Tuesday, we are 5 people, on the way we shall pick up Priyatna, and the driver. Altogether the delegation of 7 people. Already driving we clear up that nobody knows really where to go. But this is not a problem, we found the village and there everybody knows everything. 5 minutes of driving in circles and we saw the place. To be more precise, almost saw it. Because by the narrow path across the rice field the van can not go and we have to walk. Jamming!

Eight thirty in the evening, as dark as pitch, mobile phone screen instead of a flash-light. Just add to all this stuff the rainfall season, which makes everything around in puddles and mud, and walking along the clay path in such conditions looks like one of the TV show’s Great Race contests. And we are pretty cultural people, I am in white trousers, Alyonka – in white leather sandals, and our friends also do not look like rice men. First one Laki is going (the tuk driver), holding on his head the case with the dinner set, then – me, with a sinking heart looking at the case on his head and praying that he for God’s sake does not slip and break to pieces our GOOD THING. Then Alyonka, Olga, Natasha, Wilhelm and Priyatna. “I had suggested”, spitefully says Alyonka, “to take some arracka, we would have drunk it on the way and it would have been easier!” But after a couple of minutes of sliding on mud our mood goes up by itself without any arracka.

Nervously-hysterical giggling gradually turns into a loud laughter. In the same time we discuss actively all the details of our walk and its possible sequences, such as fall into mud, snakes, fall into rice field slurry and other joyful moments. So, here we are. Oh boy, it’s funky! Frankly speaking I did not even expect or imagined myself such stuff. A house among palms, a big lawn, all is illuminated with lasers and light chasers, a rickety bar stand under the palm roof, a DJ playing music of 90’s interfered by times with modern Singhalese tunes, and a HUGE CROWD OF PEOPLE. 100 people at minimum. Here is a nice first blood!

We were expected as a wedding general in the village. Immediately Kasun steps out of the crowd and after greeting us with a wide and cheerful smile he takes us to get acquainted with his sister. A small, fragile and charming girl in a dressy dress of peach color, with a purse on her arm. She looks like 9, not older. “Welcome”, said the “child”. And the box traveled to the hands of some relative. “If we could only wash our feet” I asked, pointing to the feet, looking more like potter’s feet after clay battering for monumental statues in the manner of Tsaritelli. By the side way Kasun shows us to the tap. Our way went among the huge bowls of rice, mixed with a piece of plank by some Lankan. And among the pots, most likely with curry. We went back through the house and were just showered with smiles and greetings of the kin and friends. During our washing on the most comfortable place, under the roof, there appeared a table and 8 chairs - V.I.P., no doubts. While we were sitting down, there appeared plates with salads and snacks, beautiful glasses and forks. “And now is high time for arracka”, I thought and went to the bar. By my request to fill a couple of arracka glasses, the barman handled me a full bottle of arracka and a bottle of soda water. “Well, not bad for the start!” When I came bacl to the table there was already one more bottle of Arracka carefully brought by Kasun. “Vipyem!”, I heard in broken Russian and looking up I saw a Singhalese stretching his glass to take arrack with me. “Let’s drink!” I repeated after him. Several familiar Lankans from Unawatuna came up and dissolved our company. “We need to dance”, announced Olya and Natasha and mixed in the thick of the crowd. “There is no need to describe how cheerfully that was met by the people around. At once they were surrounded by the crowd of youngsters. “They are very happy that you started dancing”, Nissa whispered me (a familiar waiter from Unawatuna). “Girls felt uneasy to start dancing the first and they hid in the corners, but now when your girls started dancing they can join”. And really, the number of dancing girls increased greatly. As you remember, local people do not dance together, and here it was not an exception. All the girls were dancing on the terrace and watchful kin preserved them to be joined by local boys. Wilhelm, being industrious enough to take his camera, was practically torn into pieces by the crowd of Lankans dreaming to be photographed. 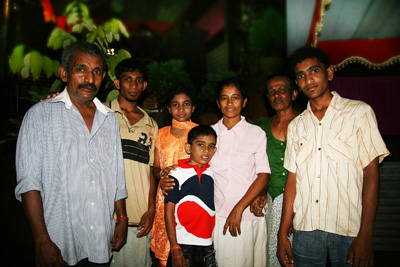 Even the family of the hero of the day gathered specially to be photographed. As a rule after such parties the only thing what is left are the pictures on the mobile, and almost no good photos. The Lankans are very excited about photos generally. So now Wilhelm just is liable to make a mini album for the family.

Lyric music began, “Shall we dance?” offered Alyonka. “Sure!” We went dancing and immediately got into the circle of guards. From one side Kasun was standing and driving away the boy trying to get closer to us, from another side – Nissa (by the way he is a bodybuilder, almost square-shaped). I’ll tell the word, that we have not ever danced like that. As if there was no crowd around, we were dancing widely and easily. Brilliant! “Enough is enough” the folk’s wisdom says. So we went home, to stay longer could become dangerous as we were going to walk back along the rice field. Careful Kasun led us to the van and despite of our refusals, by the old Russian tradition, he handled us a bottle of arrack and soda water for the road. Should I say that all our company was fully excited about the occasion. And yesterday Laki (the driver) came to us with the whole family and invited us all to the birthday of his 14-year old daughter. That’s the mess we are in.

And just now, while I was writing these lines sitting in the office, Kasun came and brought small gifts. A sachet to everyone with national Sra-Lankan candies. Just to show his care.